Humble apologies for nearly two months of complete silence. It’s been a frantically busy time, frustrating because I have been unable to finish the digitizing for side 1 of the map. Problems with the ‘official’ contours have led to a massive amount of necessary revision, a very time-consuming business which is now half-finished for side 1. I am revising my hoped-for publication date to around November 2012, as a result. But better to be right than half right.


I’ve divided this blog into chapters, ’cause there is so much to tell.


1. Mike Scott’s great inputs and the features around Skerpioensberg – with the story of Vangstasie.
2. Peak-top enlarged insets: info received.
3. An air crash from Alex
4. The Gabriel Trail
5. That damn Chockstone: is it ‘Gatdeur’? STOP PRESS: FOUND!!!
6. Some other names: ‘Bakleikraal Pool’, Oomsberg and Oompie se Kop, Agterstevlei, Slangboshoek
7. Know any of these places?


1. Skerpioensberg. Mike Scott has been a fantastic mine of info, and with his help I think we’ve sorted out the features around Skerpioensberg, with inputs from Alex Basson and Rudolf Andrag. Please have a look at the bit of map: if you have any further comments, they are very welcome. 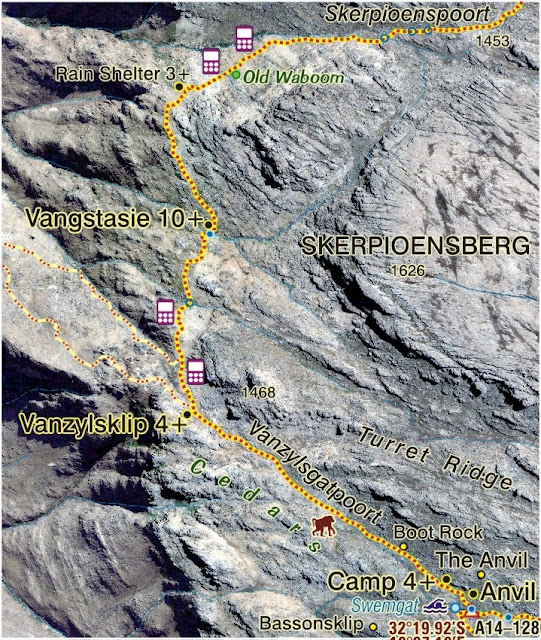 In the meantime, Johann Lanz asked: ‘A place name I have always wondered about the origin of, and what stories are behind it: Vangstasie (as it is named on maps) below Skerpioensberg.’


Vangstasie, although correctly placed, is incorrectly marked on existing maps using the typeface used for a ‘thing’, like a ‘Tierhok’, but it is in fact a place name. ‘Stasies’ [eg also ‘Sederhoutstasie’] were places to where gatherers brought produce – buchu, rooibos tea, cedar wood, kliphout bark, etc – to meet the donkeys and mules that would carry or drag the stuff to Garskraal [Algeria], Welbedacht, Wupperthal etc. Back in the 1930s the Algeria foresters became aware that buchu was being poached in the valley below, at the head of Boskloof [Sas se Hoek]. They staked out the ‘stasie’ and caught the poachers red-handed; from that day forward it has been known as ‘Vangstasie’. A couple of relevant pics follow.


One should not forget that in the late nineteenth century the Cederberg was populated by several subsistence farmers, as the remains of cultivated lands in the Middelberg/Grootvlak areas attest. The lack of stone ruins does not mean anything: many of these people lived in ‘riethuise’ or in built-up caves. There are still people in the Wupperthal ‘buiteposte’ whose forefathers lived in the mountains, and who still bear some [justifiable?] resentment towards the takeover and the formation of the ‘Goewermintsberg’.

2. My appeal for info on the peak tops has borne some fruit. Torben Wiborg, who teaches Biology at SACS [Alex’s old school] and who taught my son at Muizenberg, sent great info about trips up Middelberg South, Breekkrans, Shadow Peak, Langberg, Consolation Peak and Corridor Peak. We also have Groot-Krakadouw, Tafelberg and Truitjieskraal. Any other peak routes – esp Skerpioensberg/The Maze and Sneeuberg will be gratefully received!


3. Alex mentioned an air crash at the Pakhuis Pass in 1945. Google helped fill in the details.
In 1945 [exact date unknown, but before the war ended] a Junkers Ju-86 General David Baird crashed into the northern side of Hope Peak above the Pakhuis Pass. All on board – three crew and one passenger – were killed.
The aeroplane was one of 17 Junkers bought by SAA as airliners in 1937. All were taken over by the SAAF after war with Germany was declared in 1939.
The aeroplane’s civilian registration was ZS-AGJ [see pic] and military, serial 647. The aircraft were infamous for their poor serviceability. Naturally, after 1939 spare parts were hard to come by!
General Sir David Baird commanded the expedition against the Cape of Good Hope in 1806, capturing Cape Town and forcing the Dutch General Janssens to surrender. He was Acting Governor until 1807.

4. The Cederberg Heritage Route has opened its new route, the Gabriel Trail. It runs from Driehoek, over Gabriël’s Pass via De Rif and down to Langkloof, Eselbank, and Kleinvlei to Wupperthal. More info at www.cedheroute.co.za ; down load a freebie of the simplified route map from our ‘Hike the Cederberg’ page www.slingsbymaps.com/cederberg-hiking.aspx . 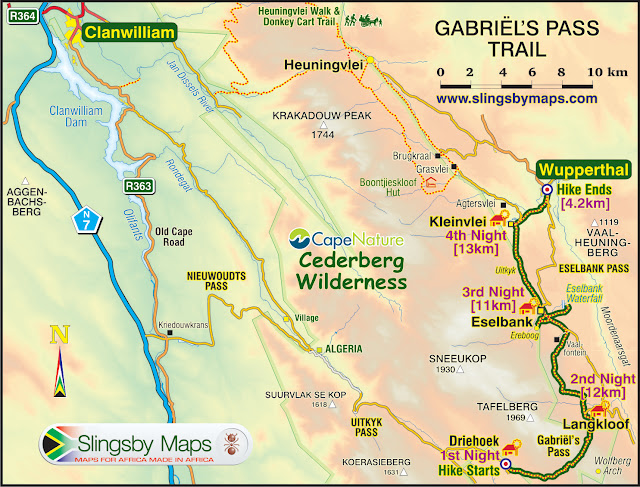 5. That Damn Chockstone: I’ve started wondering if this thing exists, as no one knows where it is. Even Ferdi Fischer failed me – and he took me there in 1964! I have, however, done an exhaustive search over Google Earth looking for the kind of shadow pattern the thing would make. There is one very good candidate, on Gatdeurkop [west of Machine Gun Ridge and Middelberg North]. Now, I know that some claim that the ‘gat deur’ is a prominent gap in the skyline, a bit like the Venster across the Algeria valley, but could it be that the Chockstone is actually the ‘gatdeur’? 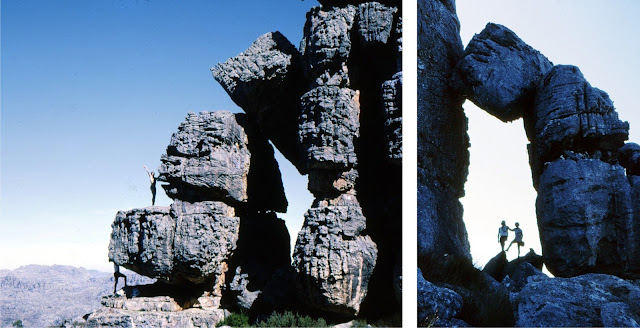 STOP PRESS ... hot on the heels of this report, Graham Bellairs has correctly located the Chock on Middelberg North ... phew! We thought it had evaporated! More next time ...


Mike Scott suggested the name ‘Bakleikraal Pool’ for the prominent pool west of Disa Pool, in the Kromrivier valley. However, according to Pip Nieuwoudt it already has a name: the area is known as Die Hoek and the pool is Die Hoek se Swemgat. But keep up the suggestions, Mike – without your inputs this info would not have come to light!


Oomsberg is the older name for the Camel in the Hondverbrand area, aka Mike again, but does anyone know the origin of Oompie se Kop near Heuningvlei? We are intrigued because Herbert Liddle, after whom Mt Oompie in the Drakensberg is named [his nickname was Oompie] also climbed a lot in the Cederberg, where he was killed by the bite of a six-eyed crab spider [probably] in the early 1900s. Anyone offer any more info?


The correct name of ‘Agtersvlei’ near Kleinvlei is Agterstevlei, according to Ingar Valentyn at the Wupperthal info office.


Jeroen Kant sent some useful info about the Driehoek area.


Finally, Slangboshoek near Suurvlakte is where two Dutch draft-dodgers were sheltered by Wit Andries Nieuwoudt during World War II, which ought to finally lay to rest all the rumours you ever heard about the Kromrivier Cave being used for this purpose. Rudolf Andrag sent this pic of the ruins. 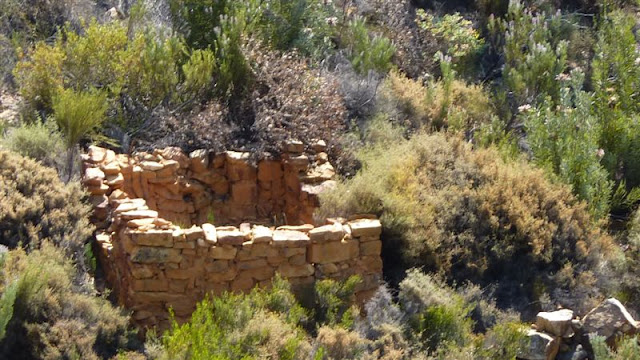 7. Does anyone know any of the following names? These are places gathered from reading: can anyone locate them correctly?


I hope to be in touch a bit sooner next time!