Report Back #29: More about names, more about mysteries

Ernst Hartwig has been extremely busy sorting out names and features on the maps. First up is his pic of the remains of the little-known SA War blockhouse at the summit of the Uitkyk Pass. I have always wondered whether there was one there – and sure enough, there it is: just a collapsed pile of stones, now, but the circular shape is still clear. 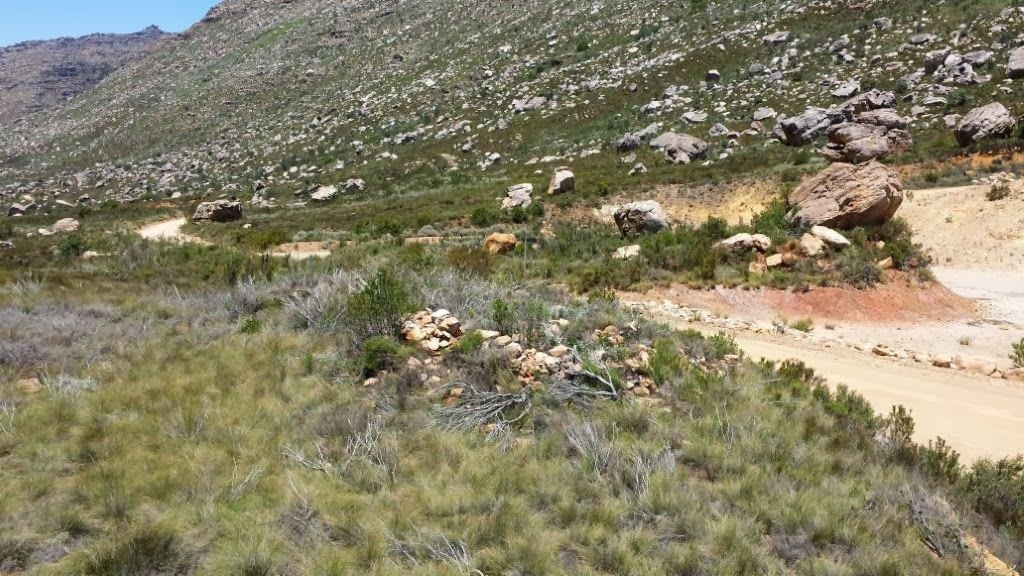 Next, Ernst pointed out that ‘Hartvlak’ in the Matjies River Nature Reserve is in fact a corruption of ‘Hardvlak’. He pointed out that the Wageners of Matjiesrivier often moved there in winter in search of better grazing, and sent these fascinating pics to prove it. Is it too much to hope that CapeNature might restore the old farmhouse?

Ernst has also been researching the Kromrivier area and the ridges to the south, both in conversation with local ‘oldies’ and also through MCSA journals; here is a summary of ‘name changes’ and other info that will go into Edition #2; some of these have already been posted on the Cederberg Place Names blog.

Ballerjafontein: named for the occurrence there of wild mint (Mentha longifolia)
Bakmakersfontein: the ‘bakmakers’ were wood carvers who carved wooden bowls from waboom wood
Beesgat: should be spelled Biesgat and refers to the whole valley presently marked as ‘Breekkranskloof’ on the map. ‘Beesgat’ campsite will also revert to ‘Biesgat’.
The ‘Beesgatrivier’ shown in the valley south of Frustration Peak is incorrect and will be shown as ‘Hondverbrandrivier’. The entire valley is ‘Dwarskloof’, not just the section near Alsfontein.
‘Die Hok’ near Suurvlakte should be ‘Die Hoek’. The peak marked as ‘Platberg’ 1530m should be ‘Die Hoek van Suurvlei’ [or ‘Zuurvlei’ – I favour the old spellings, myself].
‘Breekkransberge’ will revert to ‘Breekkransrug’
The ravine that angles into the Biesgat from the north-west and meets it at the Biesgat Camp is ‘Kruiskloof’
‘Waboomskraal’ should be ‘Waboomwerf’

Other changes:
The ridge from Apex Peak to Gideonskop is ‘Zuurvleirug’
The high point ‘1611' north of Donkerkloofkop should be ‘Platkop’ [sorry, Torben, that height is right!] [cf Berrisford, MCSA journal 1935]
Sandfonteinkloof or Ravine is the NW – SE kloof south west of the Sandfontein Peaks

Finally, ‘Anonymous’ sent this correction to our info about Elandskloof. Why ‘Anonymous’, good person? Don’t be shy!
“Your Elandskloof entry is incorrect. The Elandskloof Pass ran up the valley and was used by stock farmers moving between the Olifants valley and the Koue Bokkeveld. The Middelberg Pass was only constructed in 1940. In 1861 the DRC purchased Farm 476 Elandskloof to establish a mission station. By 1890 there were 900 people living there, the descendants of freed and runaway slaves and Khoi. The mission was always a financial drain on the DRC and they decided to sell the farm in 1961 to the Smit brothers. The 72 families were evicted, 20 allowed to settle at Allandale. In 1996 the Land Claims Court ordered that the land be returned to the community and a process to resettle 302 beneficiaries has been under way since then.”
Incidentally, Elandskloof appears on maps as early as 1786, possibly because one of the ‘Ou Kaapse Weg’ routes went from Cardouw [near Porterville] to the Olifants valley, then up the Elandskloof and over the nek to the south into the Koue Bokkeveld. There it joined the alternative route that had crossed the Witsenberg near Tulbagh before turning up past Kunje to Sandfontein, Suurvlakte, Biesgat, Kromrivier etc etc.

For some time I’ve been convinced that the ‘Noodpad’, the road from Heuningvlei to Pakhuis, was originally opened up at the same time as Bain built the Pakhuis Pass [1877]. However, some maintain that the road was only built by the Forestry Department in the 1950s. Well, I have no info on that, but apart from the obvious fact that Leipoldt named ‘Faith’ ‘Hope’ and ‘Charity’ while riding along that route long before 1950 – the three peaks look dramatically similar from that angle, and only that angle – here’s a snippet from a fascinating map drawn up by the CO of the British garrison at Clanwilliam, in 1900.
I have coloured in the relevant names .... 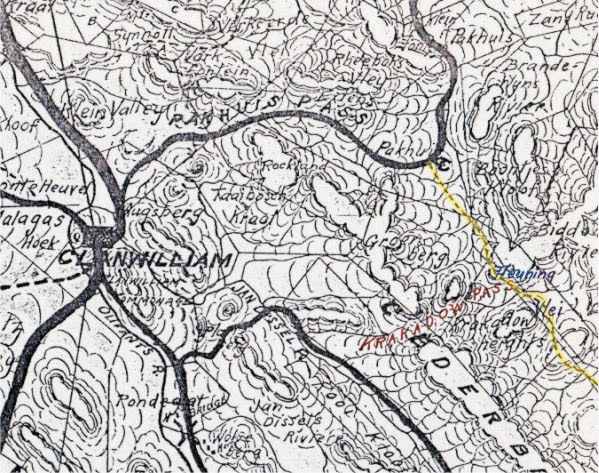 3. Help! Some unresolved Howes-Howell pics, and a discovery

I still don’t have coords for the ‘Hindenburg’ or the ‘Ventilator’, and now I have this well-built shelter to find, too ... any help, anyone?

Good news is that at last I have identified the ‘Brugklip’ above Uitkyk. Although it’s a huge arch, it is very hard to see against the mountain. I have retouched my rather poor pic to make the ‘brug’ a bit clearer. 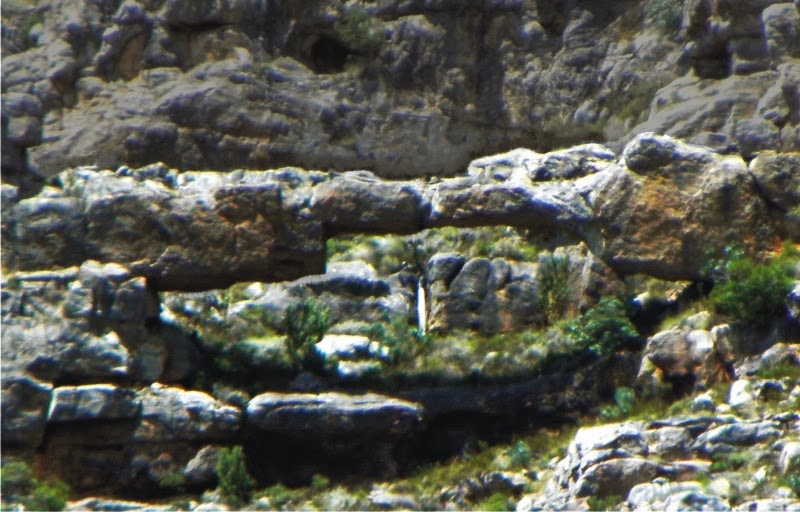 Cederberg residents were recently in an uproar over the discovery of the spoor of a large lion – I am not sure exactly where. The tracks were positively identified by Quinton Martins and Patrick Lane, both experts when it comes to panthers. After much expensive driving around and wasting many people’s valuable time the perpetrator confessed that he’d used plaster casts from a trip to the Kalahari to make the tracks. 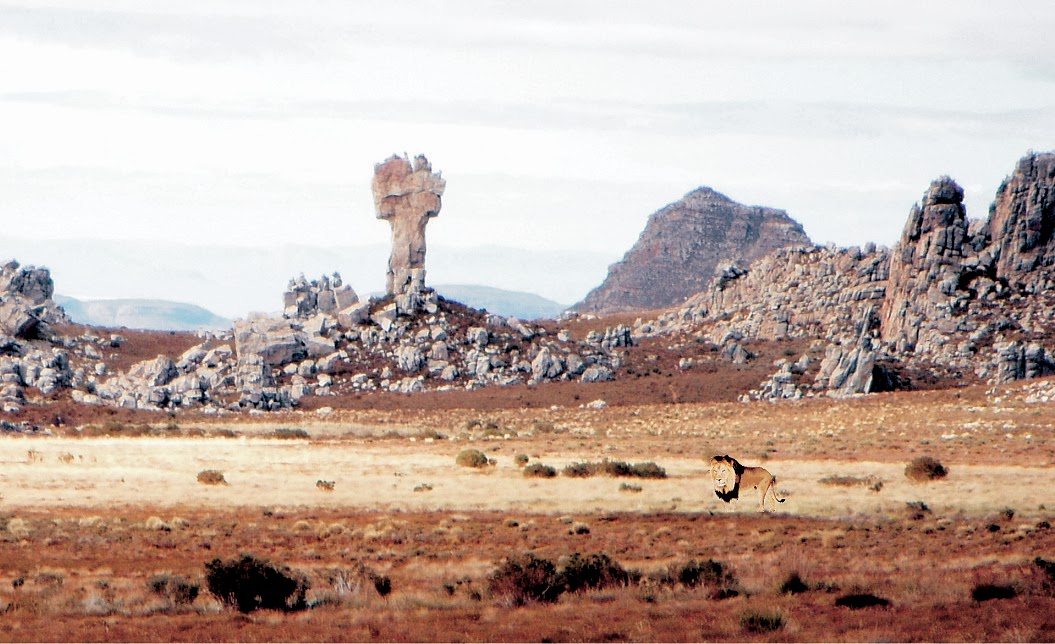 As a public service, herewith the tracks of leopards and lions so you can all be sure what that is to the right of the Cross: 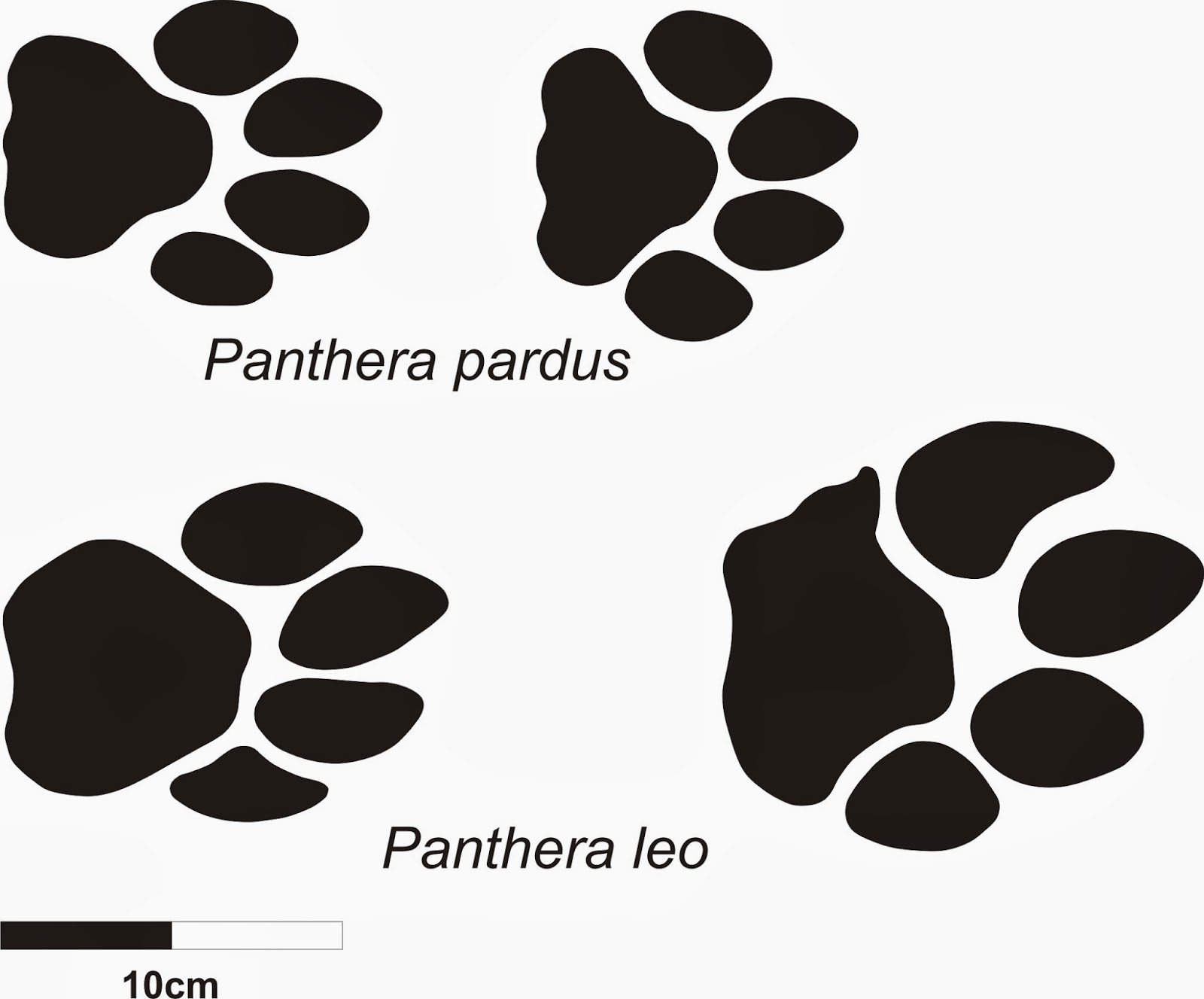 Far south of the Cederberg, an anonymous person posted this pic on Tony Rebelo’s excellent ‘iSpot’ website. As there are only about 12 extant plants of this rarest of all proteas, a new population would be a discovery of huge importance. Once again there was much rushing about wasting valuable time and money. At least the perpetrator, a botanist of note, apologised for his silly hoax. 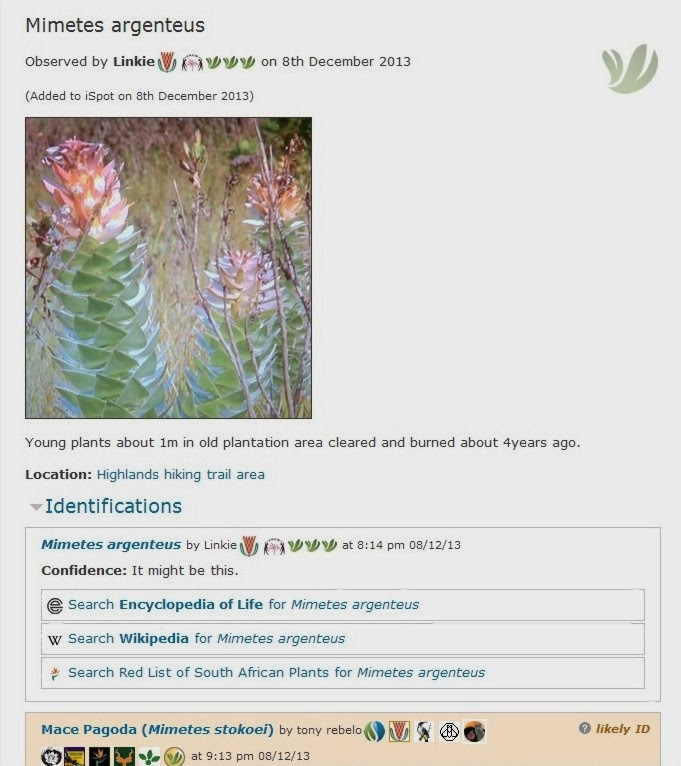 As Mrs Kaartman used to say to her Grade One pupils, “It’s only a joke if I can hear both parties laughing.”