If you’re a mountaineer interested in Munros, have a look at blog #13 below.

1. Places to Stay: maps of walks outside the Wilderness Area; Petrol at Dwarsrivier


1. Places to Stay: maps of walks outside the Wilderness Area; Petrol at Dwarsrivier

First, Cisca Nieuwoudt has asked me to point out that soon petrol will no longer be available at Dwarsrivier; they are negotiating with Cederberg Oasis who might take over the supply. Watch this space.

Second, we welcome Bushmans Kloof, Kunje, Ouma’s House at Ysterplaat [near Kunje], De Pakhuys and Cederberg Oasis onto the map. Good info about hiking routes not inside the Wilderness has been received from these and others such as Jamaka and Nuwerus, and we’re looking forward to a really comprehensive map that includes all of these ‘private’ hikes.

Arising from the Munro Memorial, subject of my previous blog, it’s a notable feature of the Scottish landscape that there are memorials all over the place. They might be quite modest, celebrating St Columba’s chapel constructed near the Mull of Kintyre in 563 AD [makes van Riebeeck look a little silly, hay] or absolutely over-the-top indulgences of dark and gloomy masonry [you can watch Paul McCartney singing about the Mull at http://www.youtube.com/watch?v=K5626WzsfMw ].
I have no patience with edifices built by the taxpayer on behalf of fat-bummed politicians – yes, Britain has its Nkandla’s, too – but there are also countless memorials to very ordinary people. What these reflect is an essential, humane respect for people, for fellow human beings that our own oft-divided nation tends to lack, however much we may boast about ‘ubuntu’.
Our Cederberg map records many memorials – the settlement cemeteries, the Anglo-Boer War forts; the Englishman’s Grave, the unmarked graves at Papkuilsfontein – and the 1945 aircraft accident at Pakhuis. This was recently reported upon by Go! Magazine, controversially  because there were inaccuracies in the report. CapeNature were not happy with the article, which incorrectly suggested that a trail was being built to the site – it is not! CN suggested that the crash location was a “grave site” and that souvenir hunters should be discouraged. I’d agree with that, but Graham Bellairs has also put his oar in ... so here’s a debate where you can throw your hat into the ring too, please ... http://www.slingsbymaps.com/contactus.aspx
“Interesting story about the Junkers. I think it should be left on the map. It is far from any path and on a remote steep mountain slope at 1000 metres so it’s unlikely to be visited by many and those with the desire to do so would probably be respectful. I mean, Louis Leipoldt’s grave is still there at the side of the pass and would be far more subject to possible vandalism or ‘souvenirism’ ...
“People die all over the show in all sorts of gory ways. The mess gets cleaned up, the wrecks of planes, cars and buses are removed, the roads are reopened for traffic and life goes on... The wreckage of the jets was removed from Devil’s Peak and the pristine beauty of the slopes restored. The runway was cleared and repaired and Charles de Gaulle was reopened after the spectacular Concorde crash in more recent times. Hiroshima has been rebuilt. I wonder why CapeNature or the SA Air Force have not cleaned up the mess left behind in the wilderness area near Pakhuis Pass? What makes it so special and different? [my bolding – Ed] I think it is misplaced sentiment. Clearing a crash site does not detract from the respect or sadness for the loss of the dead which fellow humans show and feel for those who died so tragically.
“It will be interesting to see what people have to say. I still think that marking the spot is fine as long as there is a note that visitors should respect the site ...”
What do the families of the crash victims think? This received from Paddy O’Leary ...
“A friend drew my attention to your response to the Weg/Go! magazine article on the Junkers crash in the Cederberg and I am responding to your request for the date of the crash. My uncle, Capt K. L. O’Leary (SAAF) died in that crash on 8 July 1945. I contacted the SAAF Museum to check whether there had been more than one Junkers crash in the Cederberg. I have pasted their reply below ...
“ ‘Dear Paddy, it was definitely 1945. Your uncle was unfortunate to be a passenger on the flight, the crew were Captain HP Blinkhorn AFC (pilot), Flt-Sgt RH Ford and Air-Cpl FE Ford (wireless operator). It was en-route Swartkop to Brooklyn (Ysterplaat) with a cargo of plywood when it crashed in heavy cloud and rain conditions. I understand there are still a few smaller pieces of the wreckage on site, the largest, a section of rear fuselage, was removed to the Air Force Museum at Swartkop in Pretoria a few years ago for display.’
“ ‘Regards Steven McLean, Historical Research Assistant to SAAF Museum, AFB Ysterplaat.’
“I’m delighted that information is useful to you. I was very pleased that you had noted and pointed out the inaccuracies in the Weg! article, not just the one I knew about. I ... feel that it would be good to have some kind of memorial on the site to the men who died in the crash.”

What do you think?

George van der Watt sent us this pic from Driehoek, of a ‘memorial’ of quite a different kind. 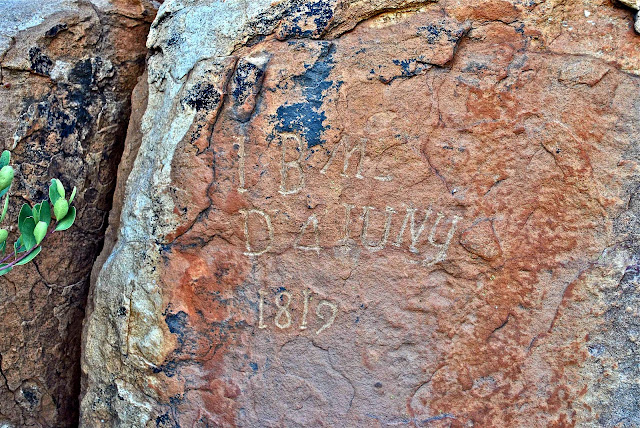 Thanks for the pic, George. The engraving on the rock is a surveyor’s mark – it reads “IBM  D  4 Juny 1819”, which was the day upon which a surveyor, Jan Schutte, finished his survey of Driehoek – he had been ordered to survey all the Cederberg farms by a British Government commission of inspection. The D stands for Driehoek and the date is the survey date, but I haven’t a clue what IBM stands for. Any offers?

After a month’s break exploring the Scottish Highlands and northern Wales we are back at the drawing board; the mapping of Side Two proceeds apace. No deadlines yet! In the meantime, we’ve had inputs on the Rim of Africa routes from Galeo Saintz and Johann Lanz, and lots of inputs on the Howes-Howell photos. We need more, though – keep ’em coming, please.


In January 2012 Torben Wiborg sent me this email:


“I have a 10-year goal to climb all the 1 600 metre named peaks in the ‘old’ Western Cape, as published in the MCSA Journal about 10 years ago.  There are 133 peaks on the list.  In  the past three years I have managed to climb 58 of them... interestingly enough, only 8 peaks on the list require rope work...”
I was reminded of Torben’s letter on our recent trip to the Scottish Highlands, where we came across this cairn on the little pass between the Bridge of Orchy and Glencoe. 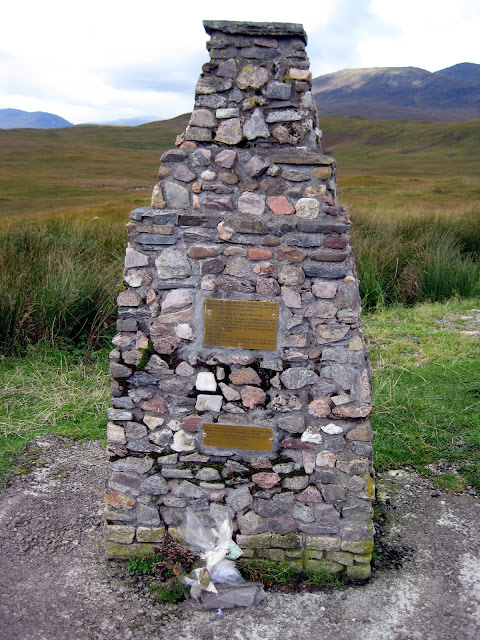 I’m sure many MCSA members might be familiar with the cairn; but for the benefit of those who are not, the upper inscription reads:


This Cairn is dedicated to the memory of the many hundreds of mountaineers who have lost their lives climbing Scottish mountains.
They died in a place they loved.
Also in memory of Sir Hugh T. Munro of Lindertis, who prior to his death in 1919 published the “Munro Tables” after a meticulous study of locations and heights of all Scottish Mountains in excess of 3000 ft [914.4 metres].
Thereafter all mountain summits and associated peaks over 3000 ft became known as “Munros” and “Munro Tops” respectively.


Each stone in this cairn was taken from peaks over 3000 ft by W.G.Park and number 795 in total. The headstone is from the ruins of Lindertis House, former home of Sir Hugh Munro.
Cairn built by W.G.Park – May 2000

The rugged Munros might be just a little more than half the height of Torben’s 1600 metre Cape peaks, but they’re at a latitude that would generally freeze the cotton socks off your average African. The memorial is poignant and, in its wild, wild setting at the edge of the Rannoch, Britain’s largest pure wilderness, evocative beyond measure. Do we have similar memorials to the brave souls who have conquered our own Munro’s? Good luck on the 133 “Torbens”, Torben!

Posted by Die Kaartman at 8:23 AM No comments: