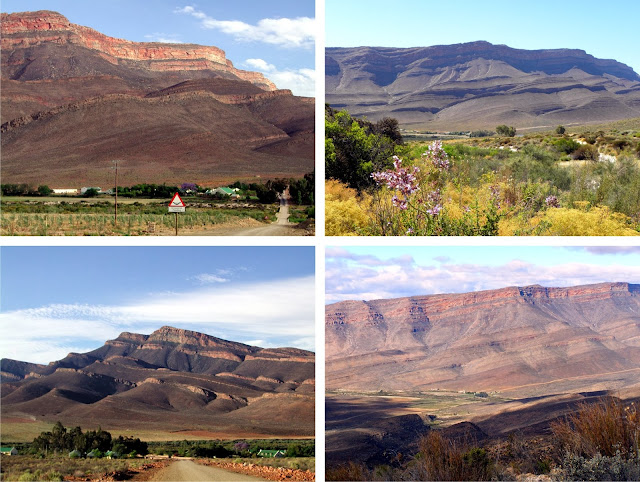 5. Koppieshoogte and the Khoi monument

The Kaartmans were invited to introduce ‘Hike the Cederberg’ to the quarterly meeting of the Cederberg Conservancy last weekend. The venue was that great place, Mount Ceder, another one of those which, if you haven’t stayed there yet, it’s high time that you did. 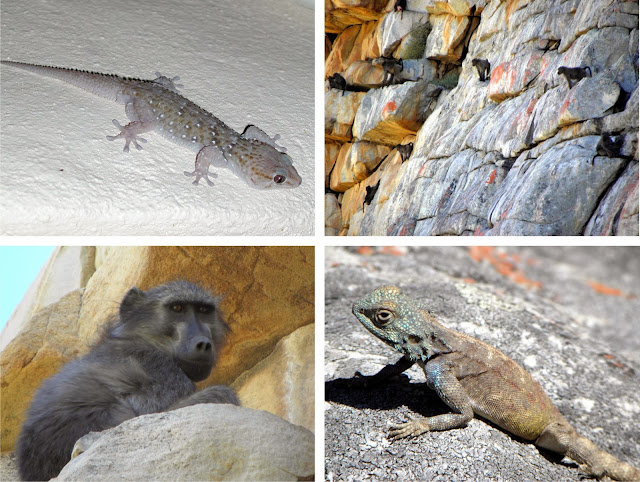 It was Civil Society weekend for us, and if you think all Civil Society organizations are para-political animals, like fighters for AIDS treatment, for better education standards, for dumping e-tolling, etc etc you’d be wrong. On our way into the mountains we visited the Liggiefees at PA Hamlet – it’s an outdoor evening of music and lekker kos and bright and pretty Christmas lights put on by, and in aid of, the local Ouetehuis [Engelsmanne say ‘old age home’]. It did not sound like the sort of thing the Kaartmanne would normally drop everything to attend – but it was an eye-opener. The event drew the communities of ‘Hemlit’ and ‘Sêris’ together in a really joyful evening that transcended many social barriers, and sparked fresh hope on a weekend when the news was dominated by yet-more evidence of our kleptocratic leaders wallowing in their stolen wealth.
At Op die Berg we diverted for a brief visit to another great initiative – there in the Kerksaal was an expert guitar-player and music teacher voluntarily running a workshop for twenty-odd teenagers from the surrounding farms. I forget [with regret] the name of the organization that raised the money to buy the guitars, transport the boys and girls, feed them and reward them with prizes later, but it was all really good civil society stuff, building communities, developing young people, inspiring hope in the future once again.
And of course at Mount Ceder we sat in on the Conservancy meeting, another civil society initiative that unites the landowners of the Cederberg in an effort to conserve their wonderful environment while developing sustainable tourism, better security, labour development and facilities for the benefit of all. It was a privilege to attend the meeting and the absolutely magnificent dinner that followed; this Kaartman was deeply honoured to receive honorary Friendship of the Conservancy.
Quinton Martins of the Cape Leopard Trust also graciously conferred upon us status as Creatures worth Conserving – see pic. 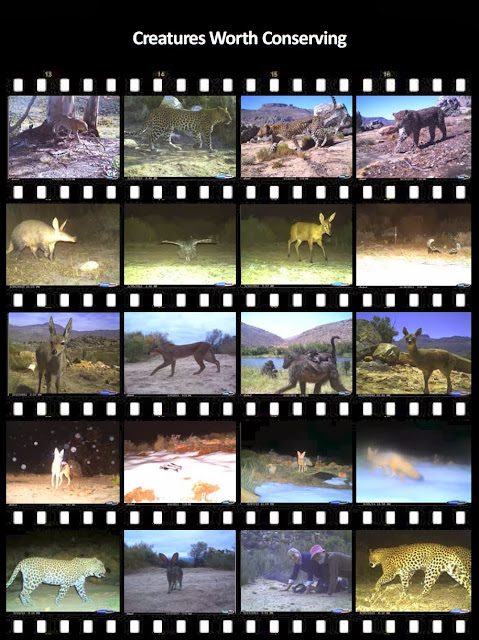 Thanks for that, Quinton.
Before leaving our comfortable and well-appointed cottage at Mount Ceder we enjoyed a dip in the Grootrivier and a visit to some of the great rock paintings on the farm.

After much thought we decided that the easiest way to gather comments, suggestions and corrections to the hiking map was to put up a blog – it deals with all our maps – that lists every problem and/or update that has come to light. Please contribute – all whose suggestions are accepted will be acknowledged in Edition #2. We’re very pleased that Edition #1 is being extensively road-tested by 120 boys from Bishops as I write – we’re hoping for plenty of remarks! We already have several small corrections to ‘Hike the Cederberg’, the most important of which is probably Kunje’s phone number: they contacted us just too late! Go to Slingsby Maps Info to contribute your comments.
Don’t forget to give some time to Cederberg Names – we’re getting a regular stream of visitors there.
Other new blogs are Slingsby Maps Reviews and Slingsby Maps Retail Outlets.

Graham sent me a great selection of pics from the remote and glorious Sandfontein area that I felt should be widely shared. We’ve put up a short three-minute movie on YouTube – watch it on full screen, or set it as a screen-saver. 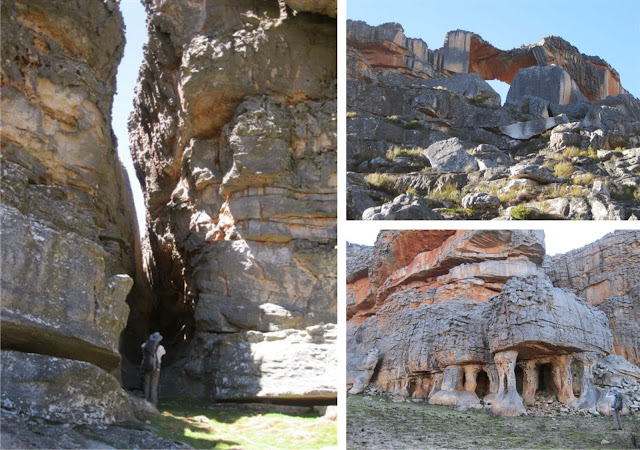 A couple of weeks ago we put up a post at Maps for Afrika concerning Gifberg. We know it’s a great place but we were unprepared for the instant, massive response, mysteriously from the USA and from Poland! We realise that ‘gifboom’ is not just a plant, it’s also an app for smart phones, but why Poland? The blog post is already by far the most visited we have ever had, and still growing. It must have been something picked up by the search engines, so here’s a list of some key words on that post, to see whether the same thing happens here!
Gifberg Gifboom Jansu Huisamen Poison Mountain Jacques Tredoux Luca Wiedouw Weimaraner Spook Hyaenanche globosa Namaqualand Putty

If we get another thousand hits in three days I’ll let you know.

5. Koppieshoogte and the Khoi monument

As you approach Op die Berg from the south you pass through a shallow nek between the mountain on your right, and a low ridge on your left. This is Koppieshoogte, an uneasy name for the spot where the severed heads of Galant and his fellow-murderer, Abel, were gruesomely displayed in 1825. Both had been executed at Worcester for their roles in the murder of Willem van der Merwe of Houdenbek farm, the farm school teacher Johannes Verlee and an unfortunate visitor. The three were murdered by Galant and his gang of slaves who had risen in revolt against the farmers at a time when rumours of emancipation had caused unease on many farms. André Brink famously dramatised the whole affair in his brilliant ‘A Chain of Voices’ (highly recommended).
To cut a long story short, on our recent visit we were told that the local Koue Bokkeveld Khoi leadership had recently erected a monument to Galant and Abel at the roadside, at Koppieshoogte.
I am reasonably certain that both Galant and Abel were of Indian origin, from the Coromandel coast originally, so why they should be so honoured by the Khoi I am not sure – but I digress. The monument was disappointing. I’m not referring here in any disparaging way to the fact that it resembles a pile of stones – such piles often had deep religious significance to the Khoi. What was really disappointing was the wreath. Didn’t the Graeco-Romans invent the idea of wreaths? And roses ... ?
Go figure.
Joy van Biljon of Ceres sent me this report:

Research complete re “monument”.  The man who I thought would know popped in to inform me. Unfortunately he was in a hurry, but here is what he said.
It was erected by the Khoisan Group on heritage day in memory of the Koppies Hoogte event.  The idea is that anyone who wants to, can add a stone as they pass by.  There was a ceremony on heritage day.  The leader for this area is Abre Hector who comes from the Cederberg  and he in turn reports to the chief of the Koranas.  The movement is a loose alliance of different groups who feel they are “first people”.  They do extensive DNA testing and the main aim is to make people proud of their heritage.  They are also busy researching old graves and trying to declare them as heritage sights.   Their logo is something like “the land is the Khoi and the Khoi is the land.”  They have a newspaper called Eerste Nasie Nuus. (There is an example on the web)(link did not work – Ed.)  The local coordinator, Jonathon Coetzee will send me his copy of the article about the monument and I will scan it for you.

Kaartman, December 2013
Posted by Die Kaartman at 4:55 PM No comments: