Report Back #30: Of Dams and Names and Ants and Frolics

I thought I had better get this blog out before April Fool’s Day this year, or you might not believe me. Last year’s blog with its true story of the takeover of Algeria went viral, even though it wasn’t that funny ...
This time round:—

2. Some new Cederberg names and other changes

4. Of ants and the future

The raising of the Clanwilliam Dam wall by 17 metres has been approved by cabinet; there are plenty of implications for road access to the Cederberg, not to speak of the effects on farms like Rondegat and Lebanon Citrus. Rudolf Andrag kindly supplied maps of proposals for the re-routing of some roads, which I have overlaid on our existing hiking map.
You’ll see that there are four proposals [purple roads] for a new bridge or drift over the Olifants at Kriedouwkrans, and three proposals for access to the farms mentioned above, as well as several other tweaks to the existing roads.
I haven’t shown the N7 changes on this map; in brief, the road near Clanwilliam will be rebuilt higher up on the slopes of Bobbejaanskop, passing behind the present Cedar Inn and petrol station.
I have no idea of the time-scale involved here; several years at least, I would imagine. 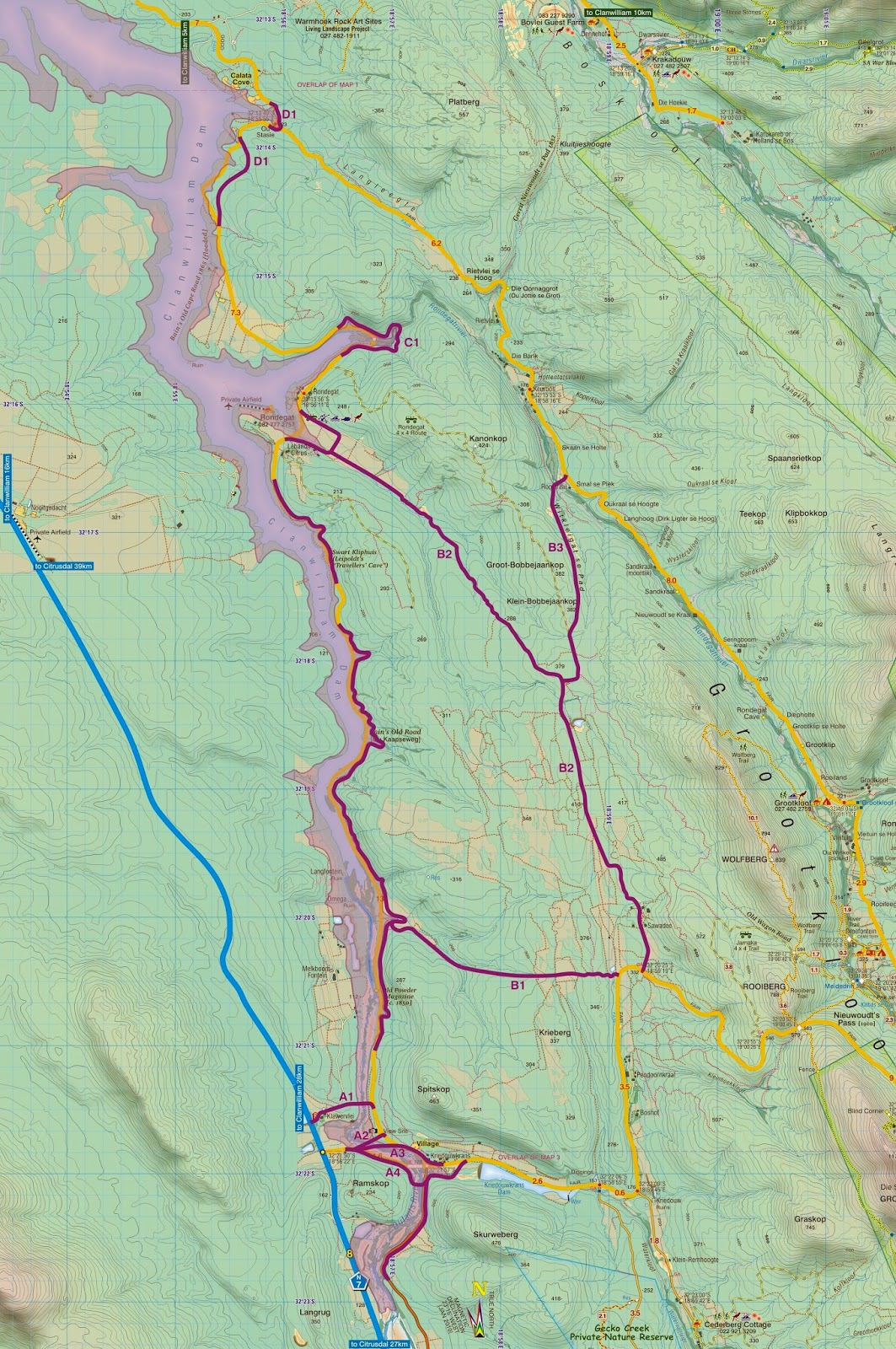 2. Some new Cederberg names and other changes

Cartographers traditionally assert their right to put names for unnamed features on their maps. If you disagree with this assertion then you’d better start campaigning for two largish continents to be renamed – though I will concede that honouring oneself, as Amerigo Vespucci did on his maps, is a bit iffy. However, any Cederberg fan will have noticed that there are a very large number of features named for individuals, most of them long forgotten, some more than worthy of the honour. It’s in the latter spirit that I intend including two new names on edition #2 of the hiking map [which is still a fair distance away, I hasten to add].
There is a man who has spent his life as a committed friend of the Cederberg. His knowledge of and love for these mountains knows no bounds; many years ago he tramped every square metre of the area mapping the distribution of the cedar trees. In this process he discovered a modest hill – 1202 metres above sea level – where the southernmost population of the endangered cedar occurs. Until now this hill has had no name; on my maps, at least, it shall be henceforth known as Andrag se Kop. It’s the least I can do in return for your generosity in sharing your knowledge and your enthusiasm, Rudolf my friend. [In subsequent correspondence the ever-modest Rudolf has requested that we use the slightly more generalised name Rudolf se Kop for the hillock in question. Makes sense; after all, we don't have the United States of Vespucci, do we? Rudolf se Kop it is, Mr Andrag] 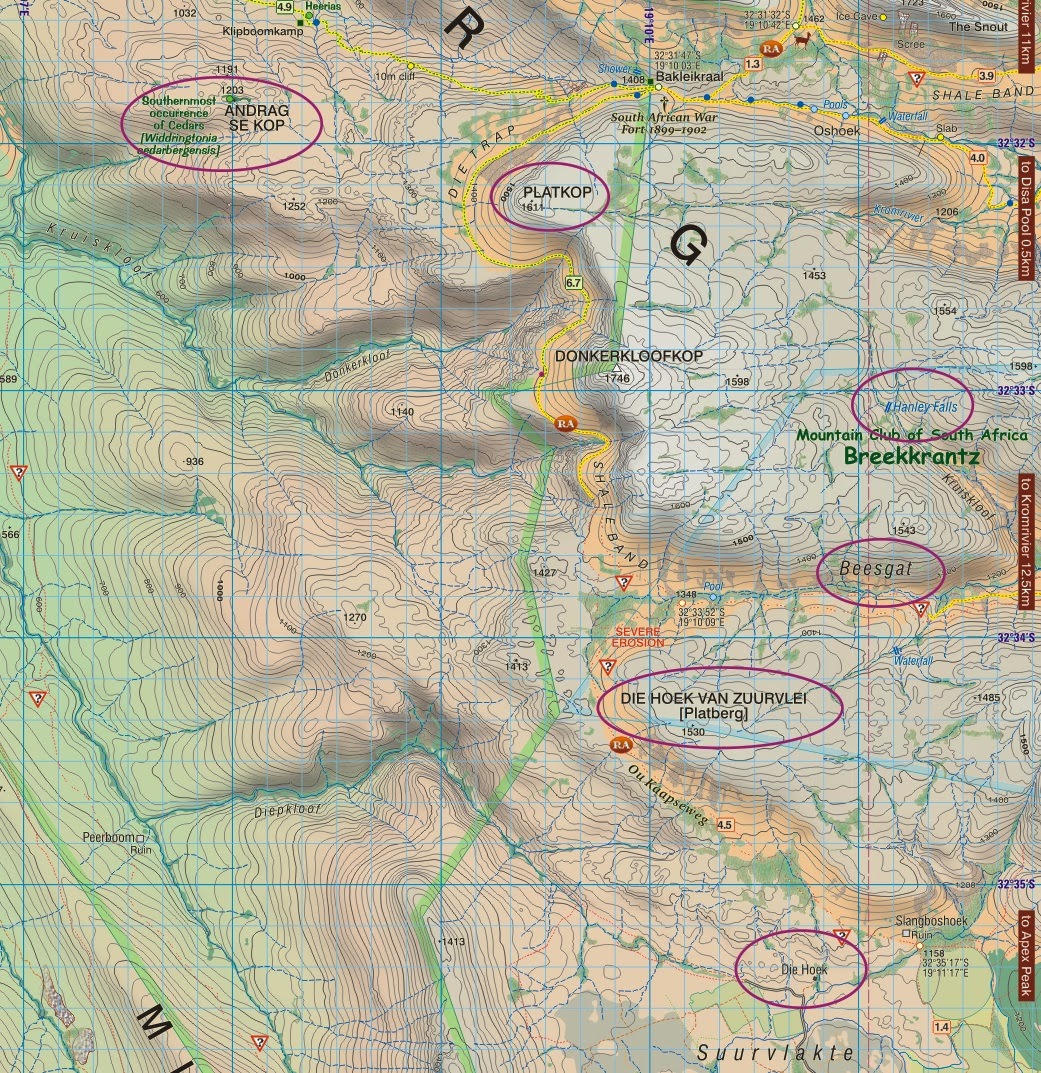 When he was about twelve years old Mark Hanley had a teacher, the late and indeed great Brian Snaddon, who set up a programme to get his pupils out into the wild, to enjoy experiences outside the mundane school-sports-comfort-zone. Brian called his programme the ‘Challenge’; as a young student teacher I had the privilege of assisting Brian with sailing trips at Zeekoevlei; camping out at Noordhoek; hikes up Table Mountain and – perhaps Mark’s first Cederberg experiences – to Kromrivier, Sanddrif and the Stadsaal.
In due course Mark became a geography teacher at Bishops, where he founded an annual event known as the Bishops Epic. The entire Grade 10 class descends upon the Cederberg towards the end of each year to enjoy a programme of physical challenges, conservation initiatives and community engagement, and I would like to think that at least some of Mark’s inspiration came from his old teacher, Brian Snaddon.
Graham Robertson, Bishops teacher, takes up the tale:
“Mark Hanley passed away in September of 2010 and our plan is that [his wife] Mandy will unveil a plaque in his honour at Traveller’s Rest in front of a tree we planted there in 2010. It will read:

In memory of Mark Hanley (1956 - 2010), OD and founder of the Bishops Epic. Much loved and remembered by those whose lives he enriched.
‘It is not the mountain we conquer, but ourselves.’
Unveiled by Mandy Hanley, November 2013
“We’ve also set up a fund called the Mark Hanley Education Fund that is being used to assist to pay the High School fees of some of the children we have worked with at Elizabethsfontein Primary – currently two children are benefitting from this and boys who have been to the base we run at Elizabethsfontein are encouraged to find ways to raise funds to increase our level of contribution in this area. We’re hoping this will grow in the years to come.”
A colleague of Mark’s, Philip Court, who is also part of the Bishops Epic, wrote that
“In the year that Mark died Graeme Klerck and I hiked past a beautiful ‘unknown’ waterfall which we decided to name Hanley Falls. The name Hanley Falls has stuck amongst the Epic staff and boys ...”
So there it is. Hanley Falls shall henceforth be so named upon my maps; I can’t think of a more appropriate tribute to a fellow geographer, a former pupil, and another devotee of the Cederberg and its wild corners.
Platkop has emerged from old MCSA journals as the forgotten name of the flat peak north of Donkerkloofkop; other names on the map extract such as Beesgat and Die Hoek van Zuurvlei come from the same source.

Rudolf Andrag sent me the pic below of Ballerjafontein at Kromrivier, named, as Ernst Hartwig pointed out to me, for the wild mint plant, or ‘ballerja’ [also sometimes called ‘balderjan’] [Mentha longifolia].
Which is a pity, because there is no ballerja at Ballerjafontein. ‘Ballerja’ also means ‘frolic’, and the idea of a ‘Spring of the Frolic’ at Kromrivier conjures up some interesting images – what did they get up to under those oak trees, in them good old days?

4. Of ants and the future

Many Cederberg fans will be aware of the role of ants in fynbos ecology, both as distributors of seeds and [more obscurely] as pollinators. The processes involving indigenous species are disrupted by invasive species, which have the ability to wipe out indigenous ants, even species very much larger than themselves. You’ve probably all heard of Argentine ants, but what you may not know is that there may be as many as nine invasive species in the Western Cape. We have a very poor idea of their distribution, but the few studies that there have been indicate a potentially disastrous effect upon a large range of fynbos plant species.
Hence a proposal from Professor William Bond for an ‘Ant Atlas Project’, similar to the highly-successful Protea Atlas project, that would involve volunteers – hikers, campers, mountaineers, outdoorsmen of all kinds – in gathering data that might help us gain a clearer picture of what’s going on down there under our feet.
It’s still very early days, but in the meantime here are a few pics to help those of you who consider that all ants look the same ... 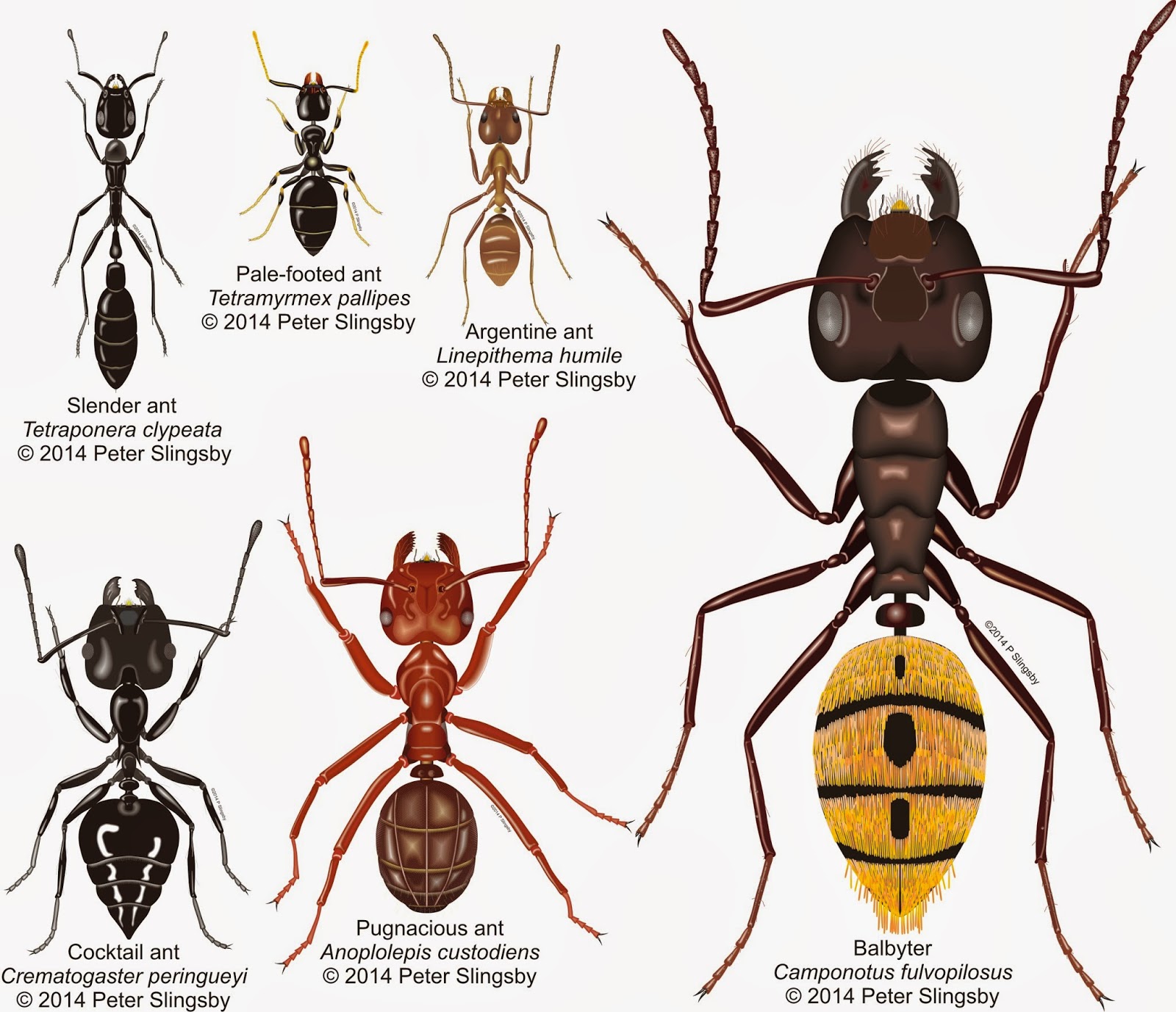 Chris Berens sent me this 1895 map of the Cederberg area – I hope it is clear enough for the names to be readable. The bad news [for me] is that it shows the old Krakadouw Pass from Clanwilliam to Heuningvlei, but does NOT show the ‘Noodpad’ to Pakhuis ... I may have to eat my words yet, Pieter .... 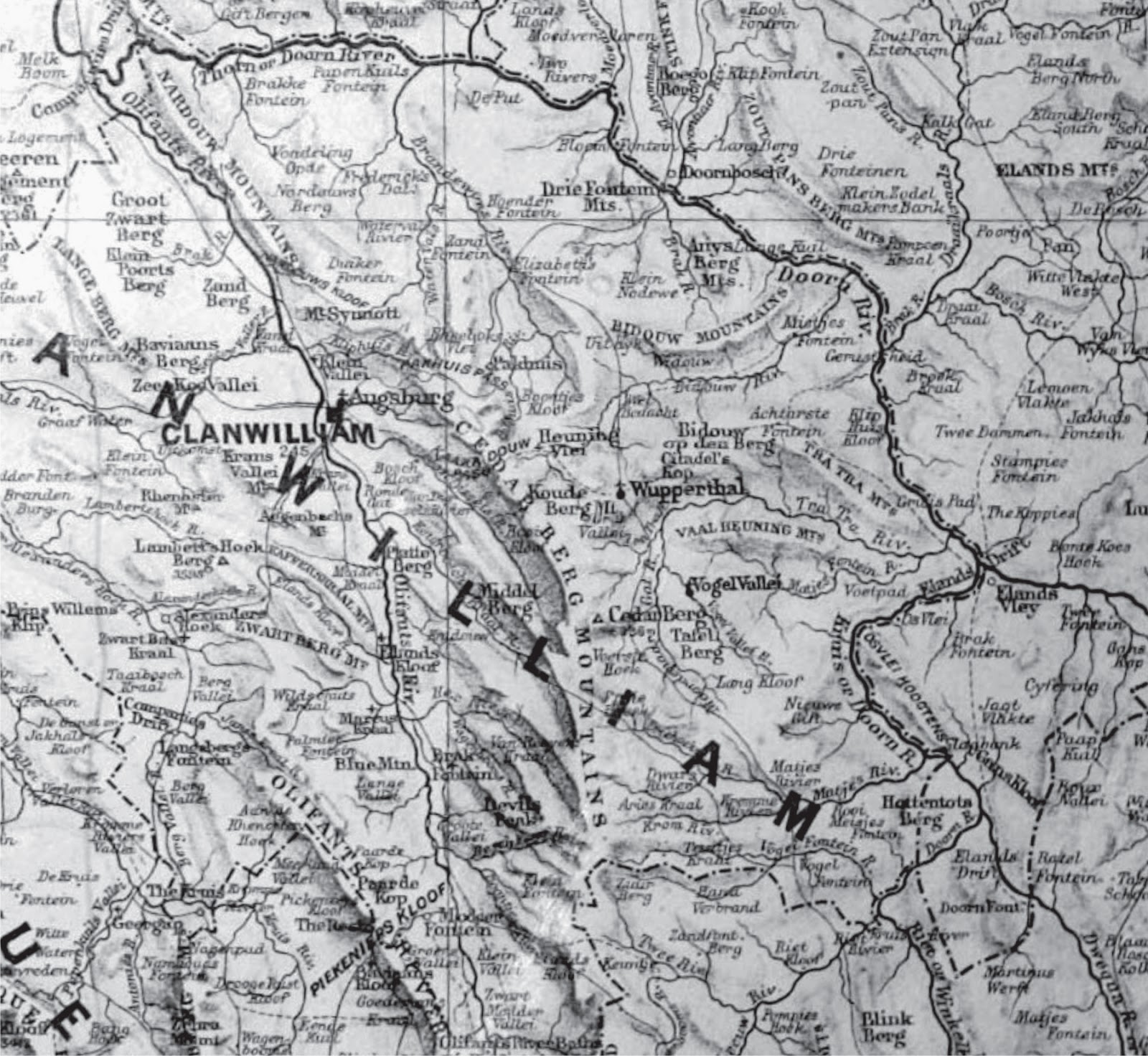